The English political philosopher John Locke argues that “men are naturally free and equal as part of the justification for understanding legitimate political government as the result of a social contract where people in the state of nature conditionally transfer some of their rights to the government in order to better ensure the stable, comfortable enjoyment of their lives, liberty, and property.” He believes, also, that “governments exist by the consent of the people in order to protect their rights.”

Unfortunately, some governments still treats their citizens as if they are subjects in a society run by Tribal rule, whereby the ruler and his tribe control all the wealth of the country and enjoy special rights and no responsibilities. On the other hand, they pillage the citizens’ legitimate rights and deprive them of their basic freedoms. These governments impose specific and contrary laws on its citizens and dispose of certain common laws without legal justifications – as is currently the situation in Bahrain.

On the 7th November 2012, the Bahraini authorities passed a decision to strip 31 Bahraini citizens of their nationalities. The decision was aired on Bahrain’s national television channel and on Bahrain’s News Agency website, before the decisions of revoking citizenships came successively.

This report will attempt to explore the historical background, the rationale behind, and the consequences of these decisions. 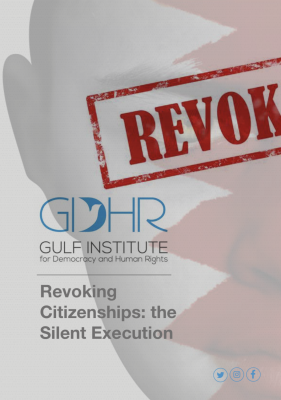